I'm writing blog posts about this pattern all out of order! I've posted about the second version of the Myosotis dress already, and today I'm going to talk about the first version I made. Then I'll need to write up something about the third variation I've just recently finished! If you hadn't guessed, I am a big fan of this pattern. I am already considering making a fourth one. 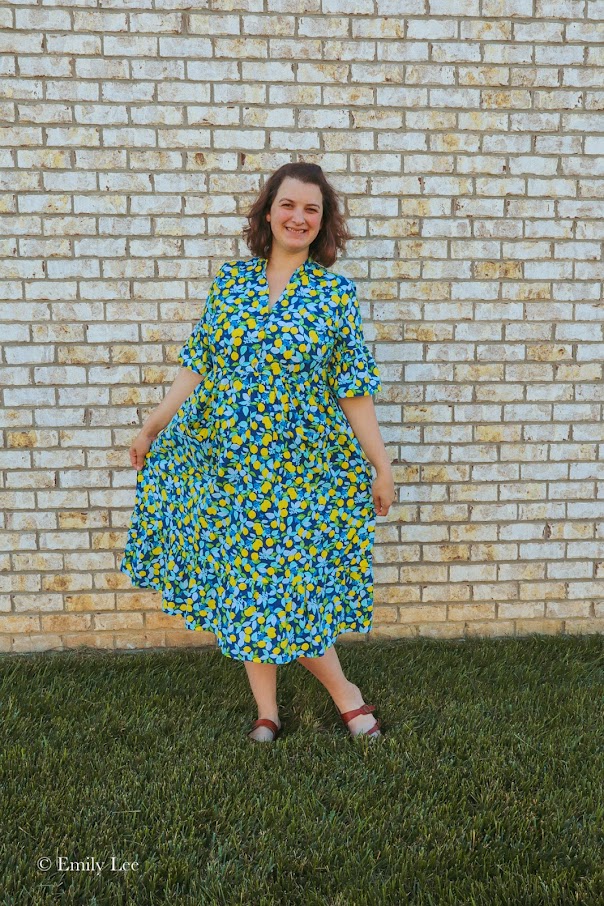 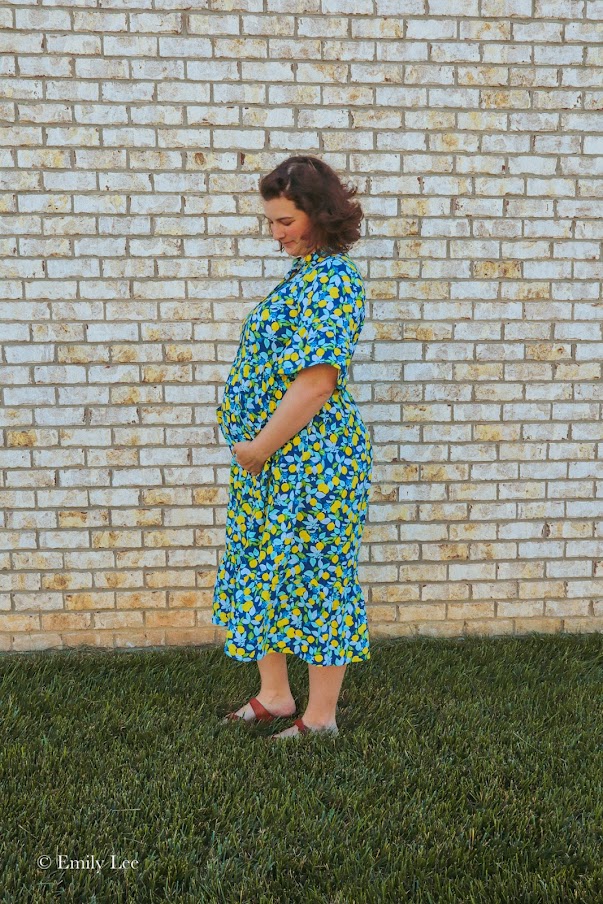 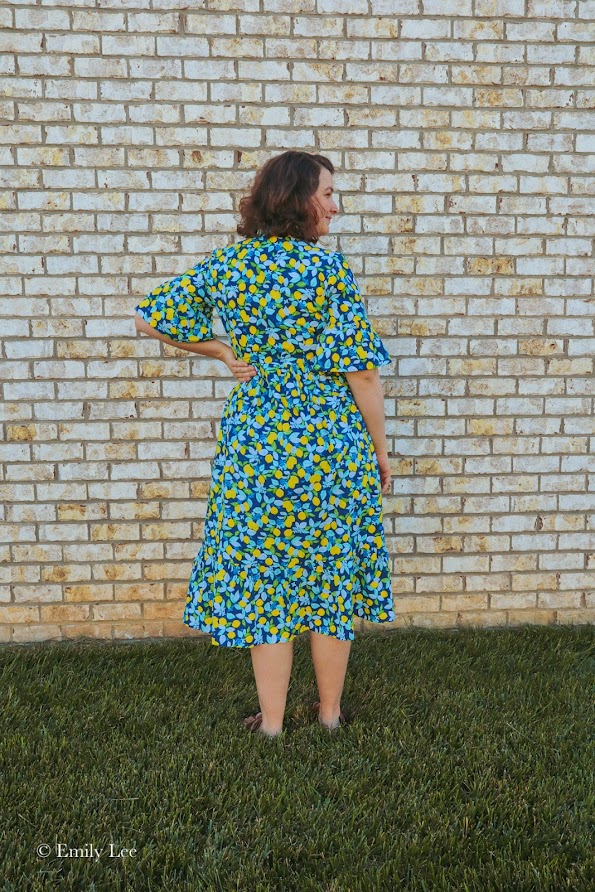 As mentioned in the first post about this pattern, I made a straight size 42. I didn't do any pattern adjustments or hacks to this version. I very much intended this to be my wearable muslin test run of the pattern. As I've made several Deer and Doe patterns before I was pretty sure it would fit will enough that I could comfortably wear it even if it wasn't the perfect fit.
Weirdly enough I have actually found that this first version still fits me just fine but the second white floral one cuts in just a touch under my bust at the waist seam. Unfortunately that means I can't wear that one any more with my bump the size that it is. I have had pretty bad heartburn/acid reflux this entire pregnancy and anything that is the slightest bit snug/tight just under my bust makes the acid reflux even worse. I have had to cycle out the majority of my dresses and all the skirts because even loose elastic exacerbates the issue.

However, I can still wear this version! I think it may be because since I didn't do any FBA, my bust lifts the waist seam and keeps it off of that area. So having a dress that doesn't fit perfectly has actually worked out in my favor! 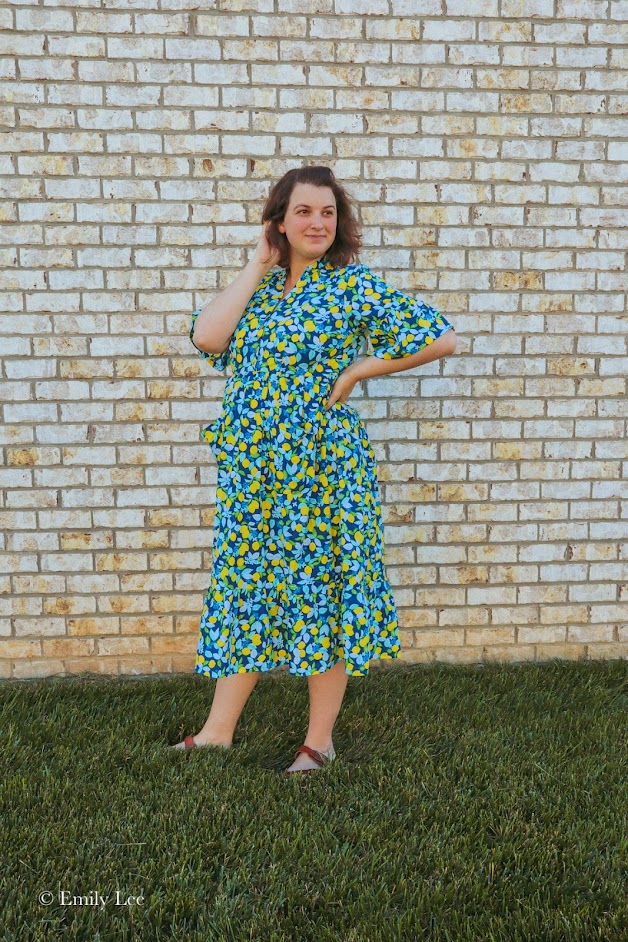 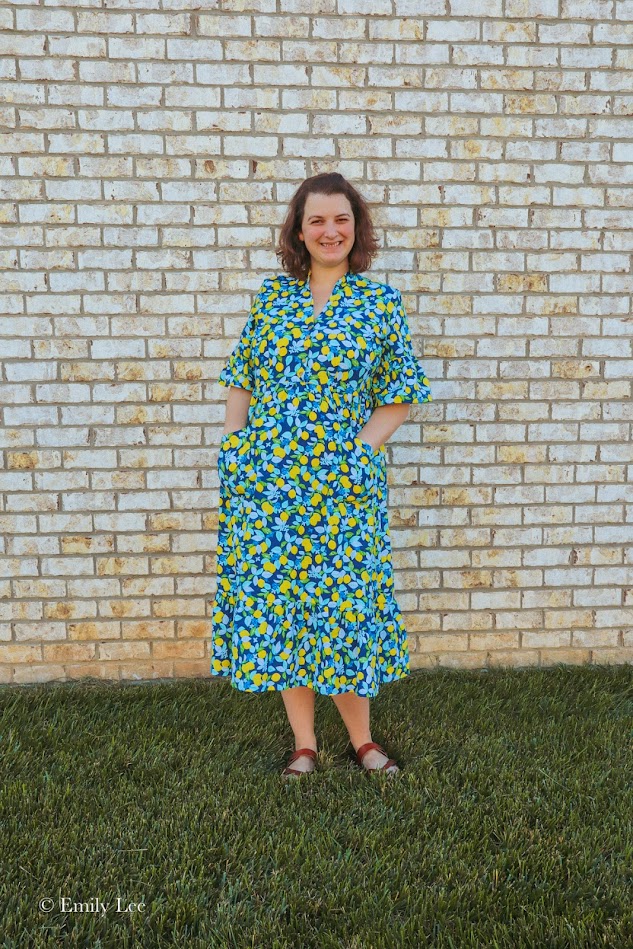 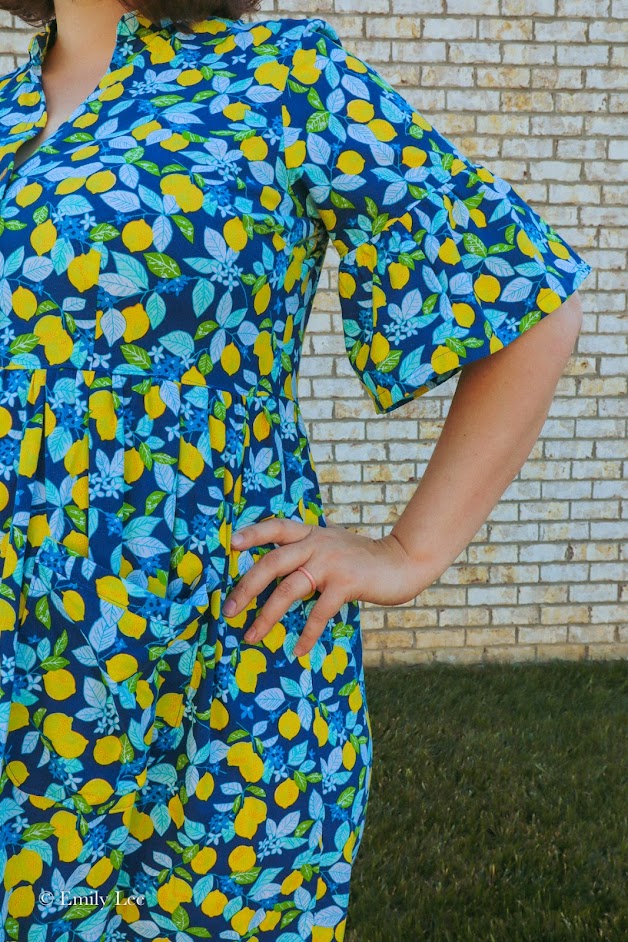 The fabric I used was an inexpensive cotton fabric that I purchased for less than $5/yd from Walmart. I have loved lemon print fabrics for ages, but most of them I've seen had a really light colored fabric background. I dislike how super light colored fabrics look on me so I've just not purchased any lemon print fabric no matter how much I liked it. Until I saw this particular one. I fell in love with it but I waited until I had the perfect project in mind to purchase any. And this was the best pattern I could have used it for!

I really cannot recommend this pattern enough though. I love everything about it. It has been such a staple during my pregnancy and I am so glad it has the buttons, or in my case snaps, down the front as it means I can continue to wear it even after the baby is born. And now that I've made three versions, it is so quick to sew up! I'll be sharing the third one on here soon, but that one I made even easier by omitting the extra skirt ruffle and the sleeve ruffles so it was a very speedy project. 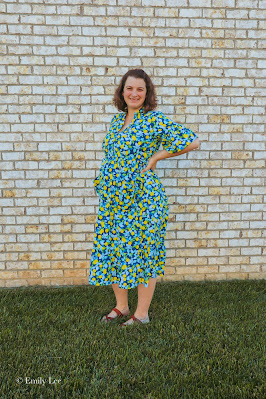 I am at the stage in my pregnancy now that any sort of sewing project has to be simple and fairly quick otherwise it won't get finished for ages. My energy levels have dropped quite a bit since I hit about 32 weeks and most of my crafting time is devoted to knitting since it doesn't require as much moving around. My bump is rapidly increasing as this baby packs on all the weight before his arrival in a few weeks which makes cutting out sewing patterns and other sewing tasks much more difficult.

But I have still been able to sew a few things which I am so grateful for because as my bump increases, my wardrobe selection drastically decreases! I only have a tiny handful of things that still fit comfortably and I could really use a few more dresses.

Hello friends! I post a new creative sewing/knitting podcast episode every other Thursday and vlogs on the in-between Thursdays. I hope you'll come join me over there!