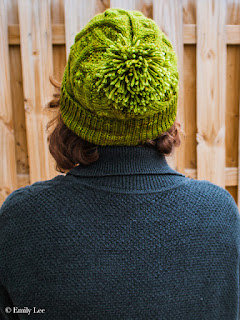 It's been a while since I shared a creative project. Especially something knitted! My creative energies have been pretty low the past couple of months. But that's okay. They come and go without much communication with me. I expect them to make a jump back up soon here with the gorgeous spring weather and sunlight that is just around the corner.

I knit this hat back in January I think. It is the recently released Dottie hat which was designed by Claire Walls who is the beautiful lady behind Flossi. I make no secret of having a serious "girl crush" on Claire. She started a Youtube knitting podcast a couple months ago and I could not have been more ecstatic. I pretty much dropped everything to go watch it. Which you should do as well... And don't blame me if Tilly makes you want a dog more than ever before! 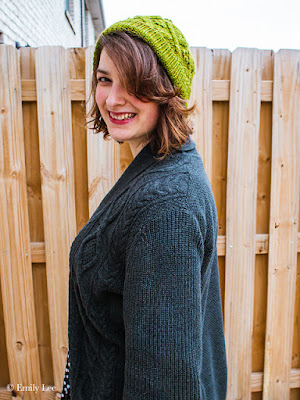 And I'll have to stop myself there.

Seriously, I have a terrible inclination to gush about people I really really like. And we're here to discuss a hat!

I knit this out of a worsted weight yarn from my stash. It is something I dyed way back when I was first experimenting with yarn dying and I've had it tucked away ever since. I don't remember exactly what the yarn content is, but probably something superwash merino/nylon.

I used US size 6 needles for the main body of the hat and size 4 for the ribbing.. Actually, I realized that either I don't have size 6 needles or they are tucked into a forgotten project somewhere because I had to go out and buy some specifically to knit this pattern. And I made a mistake in how long of circular needles to purchase. They were just too long to be used properly circular and just too short to do magic loop comfortably with.... 🤦🏼‍♀️

In the end I did my "fudged" magic loop method that I actually prefer to normal magic looping. I have one loop at the beginning of the round and then knit my way around the circumference of the project. I'm sure that make absolutely no sense so I might try to remember to take a picture next time I do something that requires magic looping.

Because of said needle fiasco, the hat was fiddly and annoying to work at times. Mostly when I first started working in pattern after completing the ribbing. Once I had more of the fabric worked, it wasn't too bad. The only other incredibly frustrating thing was due to my using paper clips as stitch markers because, despite having been knitting for more than 15 years, I had never yet purchased proper stitch markers... 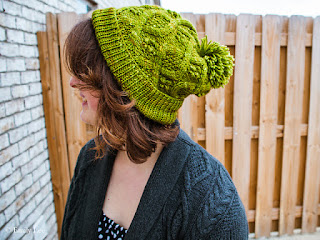 Why do I do this to myself??? In some areas, at the slightest inconvenience I will be rushing out to buy something to make it work better. And in others....... I'll struggle needlessly going, "NO!!! I will MAKE this work!!!!!"

So I actually went on Amazon and purchased myself some rose gold stitch markers. Now, naturally, it couldn't be that simple of a fix. Somehow in the process of ordering, Amazon decided to ship my purchases to Micah's parents' house.... Even though I double and triple checked to make sure they were shipping to our new house! Why!?!?! In the end? I had pretty much completed the hat before I was actually able to use my beautiful, new, properly working stitch markers. Good grief. 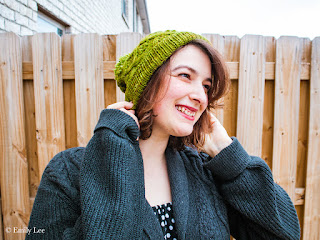 I did finish the hat though. And look at how beautiful the stitch pattern is! The cabling is quite simple to work and that moss stitch! 😍 I want an entire sweater knit in moss stitch. It's up there as one of my all time favorite stitch patterns. Plus, this was my first time knitting bobbles and I think I might be slightly addicted. The first few I worked made me giggle so much. They're little "boops" in the middle of my knitting! (Let me tell you, Micah was not impressed... he has to put up with me regularly gushing about the most ridiculous things!)

And a pom-pom. I don't know that I've ever put a pom-pom on a hand knit hat before. But look at how cute it is!!

Hello friends! I post a new creative sewing/knitting podcast episode every other Thursday and vlogs on the in-between Thursdays. I hope you'll come join me over there!